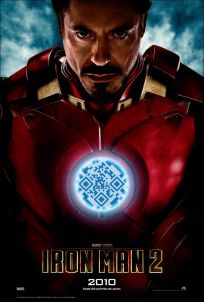 By now you are familiar with QR Codes; those two dimensional bar codes scanned by mobile devices. They are popping up everywhere: billboards, catalogs, magazine ads, real estate signs, t-shirts, product packaging and business cards. One of the more creative uses of a QR Code is on the movie poster for Iron Man 2, where the code resolves to a mobile site with photos, trailers and information about the film.

You may also know that the US Postal Service is offering a 3% discount on mail that contains a QR Code through the end of August. You can find the USPS promotion here.

Quick Response (QR) Codes were first developed in 1994 by the Japanese firm Denso Wave to track parts in the vehicle manufacturing process at Toyota. The technology was unique because the codes could be read rapidly regardless of the orientation of the scanner. Also, while other two dimensional bar codes require a license for use, the QR Code is free and code generators can be easily found on the Web.

Japan is currently the largest user and QR Codes are the de facto standard for Japanese mobile phones. Generally speaking, the codes are used more widely in countries where mobile culture is highly developed. It is a peculiar fact of life that technological development is not repeated through the same stages in every country. Therefore, it should come as no surprise that some countries never experienced landline telephone technology and have jumped straight into our mobile world.

In the US, QR Codes are being used in growing numbers for marketing and communications campaigns.  A recent study of QR code adoption by 3GVision.com showed:

As Philip Warbasse of Print2D.com—a company specializing in QR Code and mobile campaigns—explained, “Though we have a way to go before 2D codes completely go mainstream in the US, we are seeing a steady increase in their use in almost every industry. Thankfully, we are also beginning to see companies that have created QR Code campaigns in the past come to us for advice on how to better use them in the future. In reality, it’s not the code but, rather, the device that we focus on when we create mobile strategies at Print 2D.”

QR and 2D bar code campaigns are really only as good as the mobile content behind them, i.e. the success of a campaign is not only reflected in the novelty with which the QR Code itself is rendered; it is as much about the mobile content on the back end. The most successful QR Code/mobile campaigns follow these simple rules:

The expansion of QR Code use is part of the mobile revolution and the transformation of the way people all over the world consume information and media. Anyone doubting that mobile technologies will impact their business should consider the following (data from ITU):

Meanwhile, explosion of mobile access worldwide—especially the adoption of smartphones—is being taken note of by marketers and advertisers. According to Gartner, the world’s leading information technology research company, worldwide mobile advertising spending will reach $3.3 billion this year and grow by a factor of more than six times to $20.6 billion by 2015. As with other forms of online advertising, the funds for these initiatives are being taken from budgets for traditional channels such as print and broadcast media.

Fortunately, the QR Code revolution is enhancing the value of print because it provides a link between offline media and that of the online, wireless world of mobile devices and instant information. The QR Code is one means print media has to maintain its relevance as a critical component of any integrated marketing and communications campaign.