The year 2014 marks twenty-five years of the World Wide Web. If you search online for “The birth of the web” you will find a link to the page from the website of CERN (European Organization for Nuclear Research) devoted to the Web’s invention.

In March 1989, software engineer and networking specialist Tim Berners-Lee submitted a proposal at CERN for an online system of information sharing among 10,000 scientists in over 100 countries. His basic concept was to merge personal computers, networks and hypertext into a global information system. Originally calling the system “Mesh,” the proposal refers to a “web” of documents where a “hypertext browser” could be used to view data and information.

There are many important facts to be found on this page about the creation of the web by the 33-year old English-born Berners-Lee and how his idea produced the most important media technology innovation of our lifetime. If you are inclined, you can actually view Berners-Lee’s original draft proposal in HTML, text or as a PDF of the printed MacWord document that was distributed at CERN.

Although it is commonplace today, our ability to view and read these documents online from anywhere, at any time is a product of the very transformation that they brought about. But the web is not only the repository of viewable documents from the moment of the web’s invention forward; it is also becoming the online warehouse of documents that previously existed only in printed form.

Among the expanding digital library of printed archives is the vast universe of the world’s newspapers. Next to books, newspapers are the second most important paper-based knowledge and information source. And—due to their monthly, weekly or daily frequency—newspapers are the only existing chronological record of so many accomplishments, endeavors, hobbies, errors and catastrophes of people on a local, national and global scale.

Newspapers as a form of print communications began in the early seventeenth century. The first newspapers were circulated in Germany and the expansion of the form is closely associated with the spread of the printing press (hence the term “press” to describe these publications). It is said that the Strasbourg Relation, printed by Johann Carolus beginning in 1609, was the first newspaper to appear because it had a publishing frequency and contained a variety of news items.

In the 1600s, newspapers spread rapidly throughout Europe (Holland, England, France, Portugal, Spain, Sweden and Poland) and also to the American colonies. In 1690 Benjamin Harris published the first American newspaper in Boston called “Publick Occurrences Both Forreign and Domestick.” It lasted for one issue before colonial authorities shut it down.

Alongside political pamphlets such as Thomas Paine’s spectacularly popular Common Sense, American newspapers played a critical role in the revolution of 1776. Benjamin Franklin was a leading publisher—having financed numerous printing establishments throughout the colonies—and worked on a plan for an inter-colonial network of newspapers.

The era of the dramatic rise of newspapers began with the industrial revolution. As depicted in the graph of data from the Library of Congress project called “Chronicling America,” newspapers exploded across the United States throughout the 1800s. Paralleling the westward expansion and the rapid population increase across the country, the number of newspapers shot from 329 in 1800 up to 15,872 by 1900 and reached a peak at 17,083 in 1910. The number of daily newspapers in the US also reached an apex in the same time frame, with more than 2500 by the end of the first decade of the twentieth century. 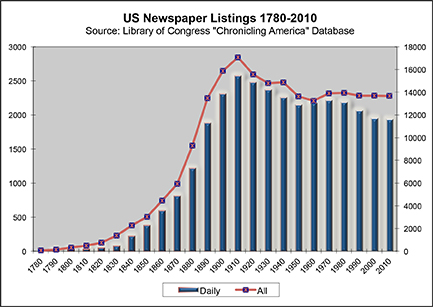 While the communications technology advancements of the 1800s—innovations in printing, typesetting, photographic reproduction and distribution as well as the telegraph—accelerated the process and reduced the cost of print publishing, significant news media alternatives to newspapers emerged in the twentieth century. First commercial radio in the 1920s and then television in the 1960s augmented the newspaper business.

In our time, the Internet and the World Wide Web have had a similar, albeit more dramatic, impact on newspapers. However, newspapers continue to exist and, although daily papers have been falling steadily since 1980, the total number of newspaper in the US has been flat since 1990 and is greater today than it was in 1960.

The point here is that the majority of two hundred years’ worth of newspaper pages lie in physical archives, some well maintained while others are deteriorating by the hour. Efforts to preserve printed newspapers by converting them to searchable database of scanned images and OCR (optical character recognition) text have been mounted, although not without challenges and difficulties.

For example, Google launched with great fanfare, a news archive of the world’s newspapers on June 6, 2006. This initially turned out to be the database of PaperofRecord.com, a firm that had been acquired by Google. But later, on September 8, 2008, Google announced the expansion of the concept with the launch of an indexed database of scanned newspapers dating back to the 1800s. This project scanned some 2,000 archives.

But on August 14, 2011, without notice or explanation, Google cancelled its news archive service. Having previously gone through a lengthy and debilitating legal fight over the Google Books program, it appeared that the search giant had been bullied by the prospect of a long drawn out fight with newspaper publishers over copyright issues.

As of December 2013, the Google news archive of more than 2,000 of the world’s most important newspapers has become accessible and searchable at: http://news.google.com/newspapers

One of the advantages of the Google archive is that it is open and freely searchable. However, initiatives to create free access newspaper archives—such as the Library of Congress at http://chroniclingamerica.loc.gov where 6.6 million newspaper pages from 1836 to 1922 have been made available to the public—are overwhelmed by subscription and fee-based online sources. Some systems offer sophisticated search tools combined with subscription and/or membership fees.

A comprehensive listing of both the “free and pay wall blocked” digital online newspaper archives has been published on Wikipedia: http://en.wikipedia.org/wiki/Wikipedia:List_of_online_newspaper_archives

Browsing the Google news archive, it is interesting to look back and read how the World Wide Web was viewed around the time that it was developed. An article “Once obscure, the World Wide Web is mainstream,” appeared on page 17 of the Reading Eagle of Reading, Pennsylvania on July 28, 1996. With 12 percent of the US population over age 16 at that time accessing the Web, Associated Press journalist Evan Ramstad noted, “the Web in a decade or so may be so common that people won’t think about it. Like the phone system on which it relies, the Web will just be there.”

Fortunately, the newspaper archives hosted on the Web have also made it possible for us to find and read today what was being said and written about the Web while it was being created.