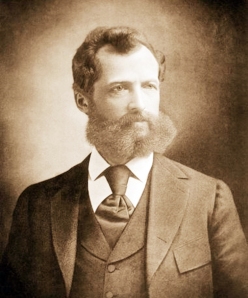 Ottmar Mergenthaler, the inventor of the Linotype machine, was born on May 11, 1854. While it may be difficult to appreciate in our era of digital innovation, Mergenthaler’s invention was a momentous achievement that transformed our industry 125 years ago.

Called the “eighth wonder of the world” by Thomas Edison, Mergenthaler’s machine automated and integrated the casting and assembly of type forms; the invention completed the advancement of printing from handcraft to industrial manufacturing.

In the early 19th century, industrial printing came into shape as iron replaced wood in press construction. Cylinders were developed and, with steam power, the rotary press was invented. Meanwhile, the 1800s saw papermaking industrialize and bookbinding convert from handiwork to mass production.

The industrial revolution increased the volume of printing and its output per hour. However, in contrast, there was one critical step that remained primitive, costly and in need of revolutionary change: typesetting.

For centuries, type composition methods remained static. Standing in front of the type case, the compositor manually picked up individually cast metal characters and placed them in sequence—including justification—onto an eight-inch composing stick. Manual typesetting required The New York Times, for example, to maintain a staff 100 compositors … to produce eight-page weekday editions and a twelve-pager on Sundays!

The search to replace the old process—which remained unchanged since Gutenberg’s time—spanned a century and went through more than 100 unsuccessful inventions. As one author wrote, “The story of the many inventors who failed, died broke or took to drink … only serves to dramatize this persistent urge of the human spirit” to leap over an important technological hurdle.

With expectations of a solution on the horizon, investors put up an estimated $10 million between 1865 and 1885 for various schemes. Among them was Mark Twain who sank $190,000 ($7 million in today’s money) into a failed contraption that had 18,000 moving parts.

It took the genius, clarity of vision and persistence of a young German emigrant to America to solve the riddle of mechanical typesetting. Arriving in Baltimore at the age of 18, Ottmar Mergenthaler was looking for an opportunity to pursue his interest in engineering.

In 1876, the young Mergenthaler—who was trained as a watchmaker— was asked to review the apparatus of another inventor. He said, “Even though I know almost nothing about printing, I have little faith that this is the machine to revolutionize an industry.” And with that, he embarked upon the project of his life. After ten years of work and at age 32, Mergenthaler demonstrated his machine publicly for the first time in the offices of The New York Tribune on July 3, 1886.

With his unique arrangement of keyboard, gears, wheels, belts, pulleys, tubes, cables, hoses, trays etc., Mergenthaler integrated a mind-boggling array of functions. At the core of his invention were: 1.) the casting of individual type forms from hot metal; 2.) the assembly of the characters into lines-of-type and; 3.) everything was done by a single operator. You can watch a Model 8 Linotype machine in action by visiting this YouTube link: http://www.youtube.com/watch?v=nf0hDWOrnWA

By 1895, there were 3,000 machines in use by publishers and printers worldwide. The fast, low cost typesetting led to an expansion of the printed word. In the US, newspapers increased pages, magazines grew in size and frequency, books were printed in greater quantities, libraries multiplied and the illiteracy rate was reduced.

Predictably, Mergenthaler—a technician, not a moneyman—was treated badly by the “publishers syndicate” that financed the development of the Linotype. Expecting rapid and large returns, they forced Ottmar to bring his invention to market before it was ready and manipulated the patent system for their own gain.

Along with other inventors of his generation, Ottmar Mergenthaler exhibited little interest in riches or personal glory. After twenty years of work and following a serious illness, he and his family took their first vacation. Traveling to his hometown in Wurttemberg, Ottmar was greeted with a hero’s welcome. Upon their return to America, however, Ottmar Mergenthaler was diagnosed with TB and, at the age of 45, he died on October 28, 1899.